IF Liang Ting Wee, the country chair of TotalEnergies Singapore, has one key mandate, it is to take the French energy group’s `green involvement’ in Singapore - and then to the rest of the region - to the next level. And in many ways, he has laid strong groundworks towards that end.

In the nearly two years since Singapore-born Liang took on that position, TotalEnergies has scooped up a vast urban charging network for electric vehicles in the city state and is working on its marine fuel business delivering low-emission fuels for ships at the Singapore port, while widening such climate-friendly efforts across the region where it has operations.

Apart from helming the group’s regional headquarters in the city state, he also wears another hat as president of the group’s marketing and services business in Asia Pacific and the Middle East. Total Energies has operations in over 40 countries with 6,800 employees in these regions.

“To me, this is a turning point because in addition to being a regional management and production hub, Singapore is now going to be a key market for us in terms of serving the needs of the customers here. It is an interesting new direction. We are also excited about it because it is a new way to contribute towards the green trend of Singapore,” said Liang, who has been with the French firm for a decade.

Having begun his career as a refinery engineer at ExxonMobil, Liang was formerly with Singapore’s Economic Development Board for 14 years and his last role there before he joined the French energy firm was director of the energy and chemicals industry cluster.

"Clearly electric vehicle and charging is a good solution...and one of most tangible efforts in lowering carbon footprint," he told The Business Times in an interview.

According to Liang, TotalEnergies has about a 60 per cent market share in terms of the number of charging points in Singapore presently. The city state is gunning for 60,000 electric vehicle (EV) charging points by 2030 and TotalEnergies’ mission is to maintain 10 to 20 per cent of the market share when that happens. “So I think there’s still a lot of room to grow,” he enthused.

Singapore’s “policy leverage” that requires the car fleet to be refreshed (cars must be de-registered after 10 years unless the Certificate of Entitlement or COE is renewed) is one characteristic that could help attain its EV goal, he opined.

Another incentive for EVs is the current high gasoline and petrol prices as a result of a supply crunch led by outpouring demand and tight market conditions chiefly spurred by the Russia-Ukraine war.

The French company which last June changed its name from Total to reflect the green energy transition, also has its gaze set on different markets and is closely watching which ones are likely to move fast in terms of transforming their fleet to EVs. “In markets that we believe are moving fast, we are prepared to move ahead of the curve or to invest in advance to contribute towards accelerating the development of this EV trend,” he said, adding that this is one reason why the company has made its move on Singapore, albeit it being a small self-contained market.

To rev up its involvement in the EV space, the energy giant last year joined forces with China’s largest green energy corporation and hydro-power producer, which also operates the giant Three Gorges Dam, to develop EV high power charging infrastructure and services within the Hubei Province. More recently in April, the energy firm tied up with a Saudi Arabian utility solutions provider to offer EV charging stations there while it is also looking to invest in the same in India.

“So, I will say that we are still serving energy for mobility, but it’s a different form of energy - instead of gasoline and diesel, we’re moving towards electricity,” he added.

Clean energy starts at home. TotalEnergies has solarised its own facilities including its largest state-of-the-art oil blending plant in Tuas, Singapore since 2019. The plant has a blending capacity of 310,000 metric tonnes a year for a wide range of lubricants from automotive, industrial and marine applications.

The energy firm has saved 1,500 parts-per-million of CO2 since it implemented the solarization of the rooftop at the production plant. Beyond that, TotalEnergies is looking at potentially transporting its lubricants products in Singapore in electric vehicles.

In March this year, the French firm’s marine fuels unit which supplies bunkering fuel for ships passing through Singapore, carried out its first marine bio-VLSFO (Very Low Sulfur Fuel Oil) which is part of its efforts to set up a local biofuel supply chain for a biofuel trial, including land storage, blending and the eventual bunkering operation.

It is also looking at the possibility of other emissions-savings fuels such as methanol or ammonia as alternative fuels for bunkering activities in the city state. On this note, TotalEnergies Marine Fuels recently signed a memorandum of understanding with the Maritime and Port Authority of Singapore (MPA) and members of an existing ITOCHU-led consortium, to accelerate the development of an ammonia fuel supply chain in Singapore.

“So, these are little efforts to make sure that within the Singapore footprint, where there is scope for us to introduce new energy mix together with the EV charging...(we can) help Singapore reduce carbon footprint.

“There is a tremendous role that Singapore can play in terms of helping us push through some of these initiatives in the region. We are using Singapore as the place to develop and move to markets around the region with similar kind of business ideas. We want to look through the whole value chain to support our customers in terms of decarbonisation,” he said.

During the toughest time for Big Oil back in March/April 2020 after oil prices suffered a historic crash in the hands of the pandemic that decimated energy demand, TotalEnergies, unlike many of its sector peers, did not carry out layoffs. Instead, it banked on a basic tool - discipline.

“The key response that we had was discipline in terms of our cost control...we were very careful with our capex allocation That’s it. We recognize that this is an industry that is cyclical by nature. So it is not something that took us totally by surprise.”

On whether the global energy crunch that has led to super elevated oil prices could be a setback for the shift away from traditional fossil fuels to clean energy, Liang replied: “What is clear to me is the desire of society for carbon neutrality. We have to understand that this is a journey - not something that can happen overnight.” 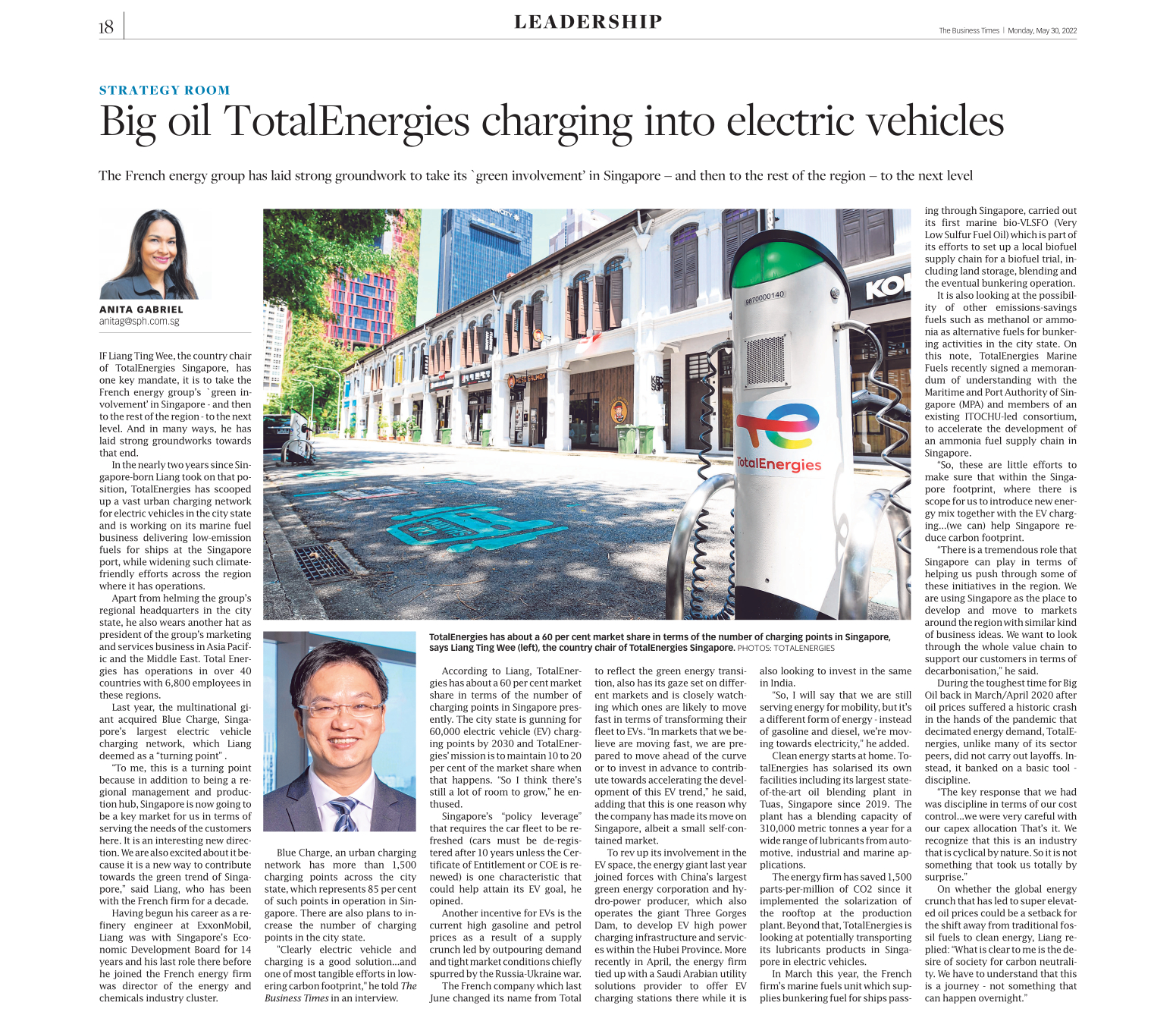